The M7 is IMO by far the best reverb unit ever made. I have some Lexicon reverbs including a 480L which is great of course but the Bric is more then a reverb, it's a real game changer.. I was a co owner, manager and chief engineer at DB studios designed by Neil Grant which was by far the best live room/ drum room in Tel-Aviv, I've left it a few years ago to open up TanTan mix and mastering room and missed my live room..! Until I've got the Bric ! I was able to recreate the sound of DB's live room with it and even to top it without paying monthly rent for a 150 square meters space in the center of Tel-Aviv !! Nothing I know doesn't even come close to a Bric for adding air movement around an instrument.. Same goes for its amazing hall algos, plates, CD plates and Nonlin.. IMO the Bric is the most powerful mixing device in my studio (or any) because when doing it right you can fake great sounding spaces very reliably to the point where the original acoustic environment doesn't really matter anymore.. I hope I'll have 3 more Bricasti's in the future

FOCUSRITE LIQUID 4PRE -  odličen 4-kanalni predojačevalec z emulacijami 40 najbolj znanih predojačevalcev. Odlično ohranjen. Cena 1.200,00
I've been recording different sources and mics through the emulations. I've found most condenser mics sound very much the same through most of the emulations. The real standouts are the Neve preamps, Flat and Millennia HV3D, and the UA m610 (which is loaded with harmonic distortion artifacts - sounds hairy). But plug in a Hi-Z mic (ribbon/dynamic) and the differences lose their subtlety, which I'm sure is due to changes in the circuit path when switching emulations, and those mics are very sensitive to impedance. Almost to the point that I can tell which one is which without having to look at the display.

I bought this mainly as a set of 4 that I could Lightpipe into my interface, and for the price (used) it is a bargain on it's own merits just running flat across the board. But the emulations add a flexibility that just cannot be matched in the same way by any other preamp. And though it can't be run hot as intuitively as a regular tube preamp with separate in/out gain stages, Focusrite still has "hot" emulations of several of the models available for download on their website. The T-Funk V72 run hot sounds awesome.

If you find one, GET IT. This is one of the most seriously underrated pieces of gear ever produced. And the great part is, it will still work as long as the hardware survives. It doesn't rely on a computer host to run.

The main point being, this is a vastly more cost effective way of broadening your sonic palette than owning 40 different preamps. It needs to be viewed in that light... and the usability trade-offs, which are minor, become more bearable. 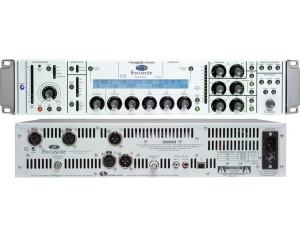